The Power of a Compliment 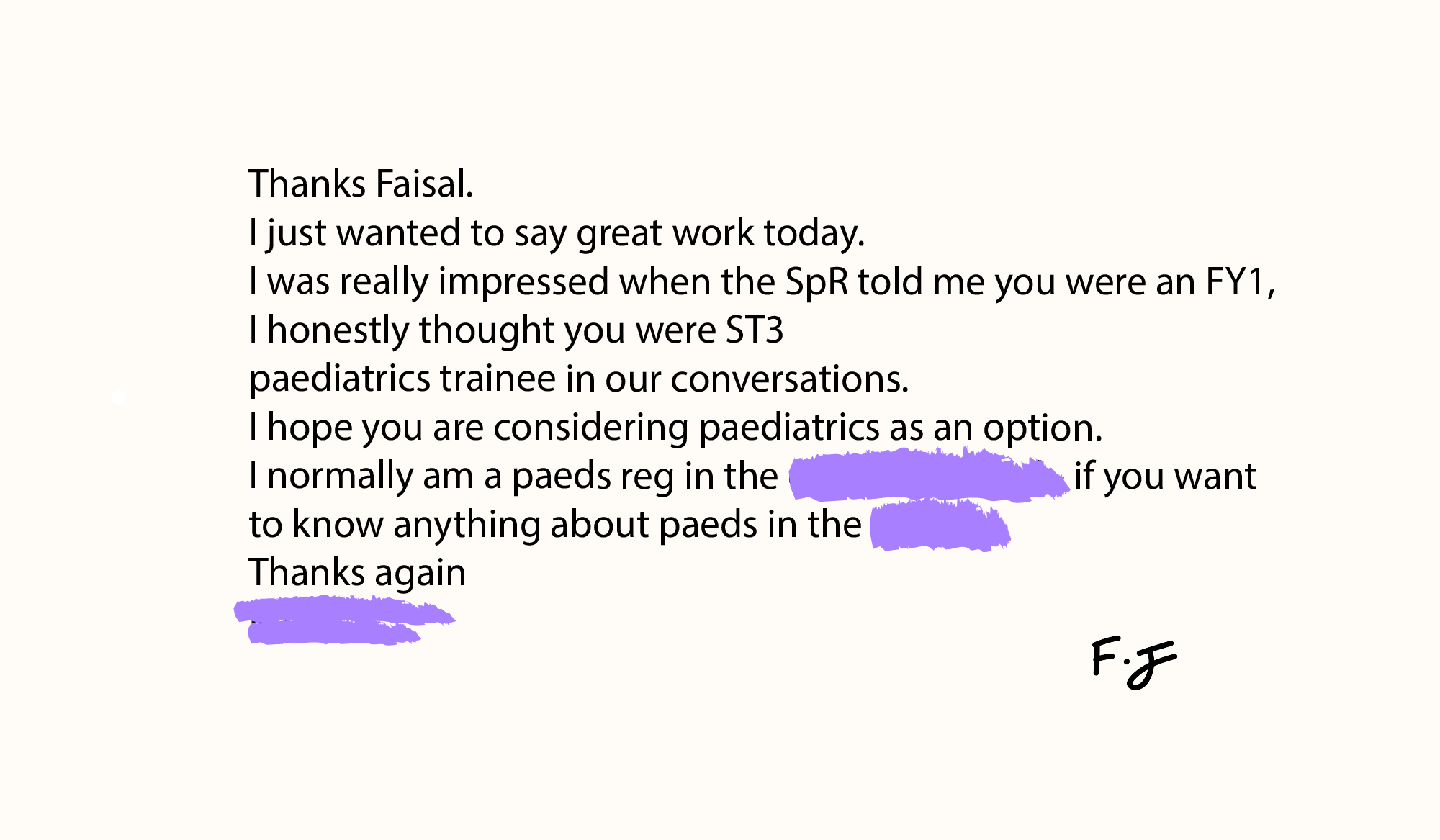 Last week, I received a heartwarming compliment from a complete stranger.

I was working a 12hour shift on the paediatric ward and was struggling to stay on top of my tasks, they just continued to pile up.

Most of my day was spent on back-and-forth discussions about a single patient with a paediatrician from another hospital.

I specifically recall complaining to my colleague about the day being particularly stressful.

Towards the end of the shift, my registrar informed me that they had picked up an incoming call from that same paediatrician.

She told me that the doctor wished to pass on her thanks to “the registrar” (me!) for my hard work, and that she was surprised to hear that I was a junior doctor when informed.

She even emailed me afterwards to thank me personally for my help, continuing a large thread of emails on the topic of our shared patient.

My shift ended with further congratulations from my extended team after my registrar shared news of the compliment.

It was so unexpected. I drove home with an unusually large grin on my face that day.

This single act had such a strong impact on me that I wanted to share a few thoughts on the power of a sincere compliment.

What’s So Special About a Compliment?

Compliments get thrown around a lot, but not every compliment has a lasting impact.

Here’s why this one did:

A compliment from family, friends or colleagues may be a nice surprise, but in most circumstances, it wouldn't necessarily make you stop and think “wow, I really didn’t expect that”.

When I speak on the phone to clinicians from other hospitals, simply being received with politeness is a conversation gone well (yes, the bar is low).

For a doctor to actually pass on a compliment after such a short string of communications, now that’s unexpected.

A good deed’s reception is amplified by its scarcity.

It was sincere and specific

If they’re used in the guise of patronising or falsely elevating someone, they can even be perceived as insulting.

A large part of complimenting sincerely is being specific in your praise.

“You look great” is far less likely to impact someone in the same way as: “Wow, you look great. I love that you’ve been really taking care of your health lately, it really shows!”

The specifics in a compliment highlight that they were actually paying sincere attention.

Whether you care to admit it or not, we all like to be appreciated.

In addition to showing her appreciation, the paediatrician made a point to highlight the compliment to my peers.

Instead of an isolated, temporary moment of reward, she triggered a talking point that bounced off multiple people, sustaining the congratulatory moment for much longer.

Knowingly or unknowingly, this domino effect led to my whole team congratulating me on the subject.

Imagine if we all made the effort to compliment each other a bit more, how many of these heartwarming scenarios could we recreate?

It came at the right time

Sometimes, a simple show of appreciation is all it takes to turn someone’s bad day on its head.

It doesn’t cost anything to compliment, yet most of us don’t make a habit of routinely complimenting people as much as we’re able to.

When it’s most needed, a strong compliment can last a lifetime.

We Need to Compliment More

When I receiving compliments, my visceral thoughts are often: “what does this person want?” or “what’s this guy’s angle?”

On the other hand, I always second-guess whether complimenting someone would make the situation awkward or ‘cringe’, so I naturally hold back.

Over the last year or so, I’ve been trying to compliment people more.

I’ve reached out to strangers I’ve never met and complimented them.

I’ve made sure to let my friends know that they’re doing great work.

There’s still plenty of times where I’ve missed the opportunity, but it’s a work in progress and I’m trying.

A simple compliment plants the seed for new relationships, strengthens existing ones and makes you feel better, too.

It’s often said that, in an argument, nobody wins.

I’d like to add that, through a sincere compliment, everybody wins.

If you need any more proof for how strongly a compliment can affect someone, this entire article was dedicated to one.

As always, thanks for reading this week’s newsletter.